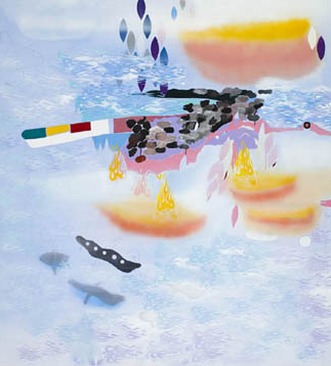 These are some lewd “abstract” paintings. Like the love-child of an art historical key party that was unexpectedly crashed by the design team for Ocean Pacific, these large-scale paintings take the slackened contours of the traditional high/low culture divide as the conceptual gesso upon which they are impressively constructed. Rather than fighting against the varied pretensions of high culture, as in previous generations from Pop to Neo-Geo, this erosion seems to be, in Daigneault’s paintings, merely a basic assumption. It is the given principle that allows for the full exfoliation of his painterly musings. The vast range of meandering references and loosened signifying slippages that Daigneault employs conjures a fantastic realm that gives license to the contaminated substance of our collective subconscious.


The three acrylic canvas’ contained within the exhibition The Other Side of Abstraction are all the same size which lends these whimsical fields a good, old-fashioned sense of serial stability. They universally make use of faded, pastel-ish hues that are punctuated with sporadic moments of blacks, whites and the occasional high intensity hue. “Quand la couleur siginifie” is perhaps the most compelling of the four paintings on display. A sea of watery coloured, tattoo-parlor, flame-balls waves across the better part of the background. Several flame-ball-coloured flame-balls fall through the centre of the canvas into a fleshy heap of misty spray-painted puddles. Muddy, grey-brown-jelly-bean-rocks recede back diagonally from the centre, covering a flat pink, mauve and baby blue schematized shoreline/hillside. The trace of pencil guidelines recurringly surrounds some of the sparsely laid out forms and there is an organic sensibility to all of his geometric shapes. The best moment of the piece, however, is the Tanguy-like blob in the bottom-left-hand- third. The faint shadow that it casts brought a smile to the face of this observer as did numerous other instances of playful, cleverness that are scattered throughout this striking exhibition.
If high culture truly no longer exists, as critics such as Donald Kuspit and Benjamin Buchloh have suggested, then all that remains is culture and everything that goes on within its malleable parameters is fair game and rife with potential semiotic, social/personal possibility. Daigneault’s paintings seize upon the expansive latitude that our current moment seemingly affords. These works illuminate eccentric pathways through the limitless scrap heap of vacated signifiers that infiltrates our collective memory. They offer a persuasive glimpse into an idiosyncratic, parallel universe wherein Helen Frankenthaler designed album covers for YES, Yves Tanguy was the greatest jean-jacket painter of his generation and Jules Olitski is still taken seriously.