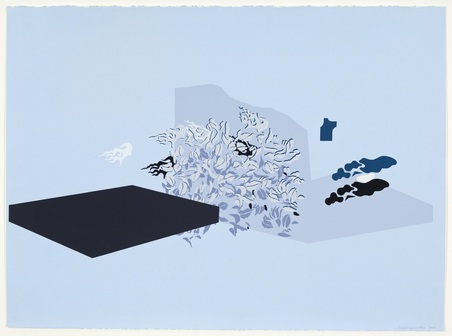 Michel Daigneault: On the other side of abstraction
by Matthew Brower

During his residency as a visiting artist at Open Studio, Michel Daigneault has created a series of screenprinted monoprints with the title the other side of abstraction. The prints have monochrome backgrounds in light blue and blue gray that have been over-printed with both abstract forms and figurative motifs. The base colours unify the series and set the stage for the interplay of the overlaid elements. The flat colours of the background suggest a space of sky or water as well as asserting the surface of the paper; the resulting tension between flatness and depth opens up the key issues the works explore. This tension, between a surface upon which forms overlap and an environment in which elements interact and adapt, oscillates between abstraction and illusionism. The blue-gray space of the prints contains larger cloud-like forms that appear to float though the series occupying different positions and fading in and out of opacity. Interacting with these cloud forms are a limited number of smaller symbolic forms which are repeated both throughout the series and within individual prints to build up tight locii of visual density. Through their layering and overlap these forms suggest volume and space particularly with the addition of Daigneault's hand-painted scaffolding binding the elements together. The images function as visual ecologies in which the semiological forms of the prints interact, compete for legibility, and proliferate strange new hybrids.

The monoprints are an extension of a body of paintings Daigneault made in 2006 and exhibited under the title: Quand la couleur signifie.(1) Examining the relation between the prints and the paintings makes clear that the other side, in Daigneault's work, is not post or after abstraction(2) but, instead, abstraction's border with decoration and illusionism. In the paintings, rather than continuing abstraction's ongoing investigation into the support, Daigneault turned to the space between abstraction and illusionism (a tension between flatness and depth) by incorporating recognizable stenciled elements drawn from popular culture. These include stylized flams (reminiscent of the painted decals on hot rods) and flowers (reminiscent of lace and wallpaper). In the paintings the stencils function either as backgrounds - stenciled flames in blue and white acint as water - or as interventions in the densely worked surfaces of the paintings. In the second case, the stencils disrupt the space of the paintings by creating a shift from the phenomenological experience of the painterly vocabulary of grids and colour fields to the semiological experience of deciphering recognizable pop cultural forms and engaging with them as signs. This semiotic engagement beings a set of kitsch references and associations in contact with the concerns of abstraction.(3)

In the prints, these stenciled elements have detached from the more complex gridded and washed fields of the paintings to inhabit the monochrome space of the prints. The shift eliminates the question of paint handling in the meaning of the stenciled forms favoring instead the selection of colour in the prints. What happens through this displacement from painting to print is that these elements cease to function as disturbances in the field of abstraction and become agents at work in the visual ecology of the prints. In this reading, the prints act as environments in which the stenciled forms interact, reproduce and evolve, forming symbiotic communities of visual hybrids. Thus, the play between the formal structures of the images, the referential and semiological readings of the stenciled figures, and the lyrical compositions and the ecological logics of the hybrid forms opens up a series of dialectical tensions that can be located as exploring the space between abstraction and illusionism. In the prints, the dense imbrications of the kitsch forms, their layering into indecipherability and their combination into new formal objects, opens the question of the precarious line between kitsch, decoration, and beauty reminding us that this space is the other side of abstraction.(4)

Endnotes:
1. James Campbell, "Michel Daigneault: A 'Dangerous' Painting", ETC, 80 (Hiver 2007-2008): 50-53
2. Jean-Francois Lyotard, "Notes on the meaning of 'post'", in T. Docherty (Ed.), Postmodernism: A Reader, New York: Columbia University Press, 1992, 47-50
3. In a way, this engagement with kitsch marks a return to the beginnings of abstraction in the European avant-garde and their incorporation of mass cultural forms into the space of art. See Tom Crow, "Modernism and Mass Culture in the Visual Arts", in Modern Art in the Common Culture, New Haven: Yale University Press, 1996, 3-37
4. See Clement Greenberg, "Avant-Garde and Kitsch", Partisian Review 6 (1939): 34-49 and Lisa Florman, "The Flattening of Collage", October, 102 (Fall, 2002): 59-86 for a compelling rereading of Greenberg's essay which argues for its offering of a negative dialectical analysis of the relationship.

The artist wishes to thank Daryl Vocat and Jill Graham

Mattthew Brower an assistant professor of Visual Arts at York University where he teaches the history of photography and modern art and visual culture. His research focuses on the visual representation of animals. 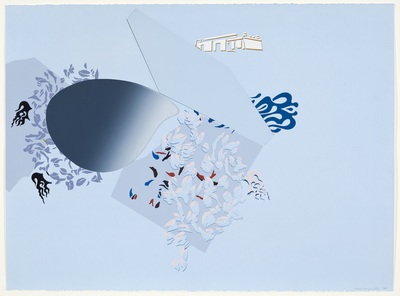 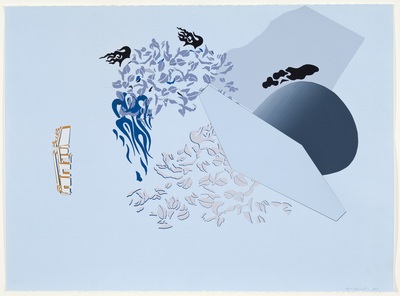